It’s safe to say that VMworld 2018 was one of the most successful events for Faction in the company’s history. From press releases, speaking sessions, our VMworld fiesta and media interviews, to having VMware CEO Pat Gelsinger stop by our booth for a demo of our Cloud Control Volumes for VMware Cloud on AWS in the VMware Cloud Marketplace – it couldn’t have gone better.

Highlights of our week at VMworld 2018

A huge thank you goes out to all of the partners, team members, and clients who made this all possible. We look forward to continuing to develop products and services around VMware Cloud on AWS and seeing everyone again next year at VMworld 2019 in San Francisco! Watch our recap video! 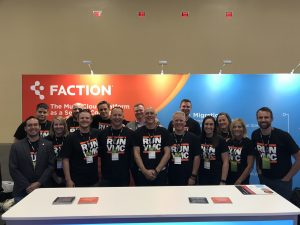 Our energetic team had a great time during the Solutions Expo sharing how to Run VMC with Faction!

If you’re curious to learn more about Faction and VMware Cloud on AWS, subscribe to our monthly digest and come see us at any of our upcoming events: